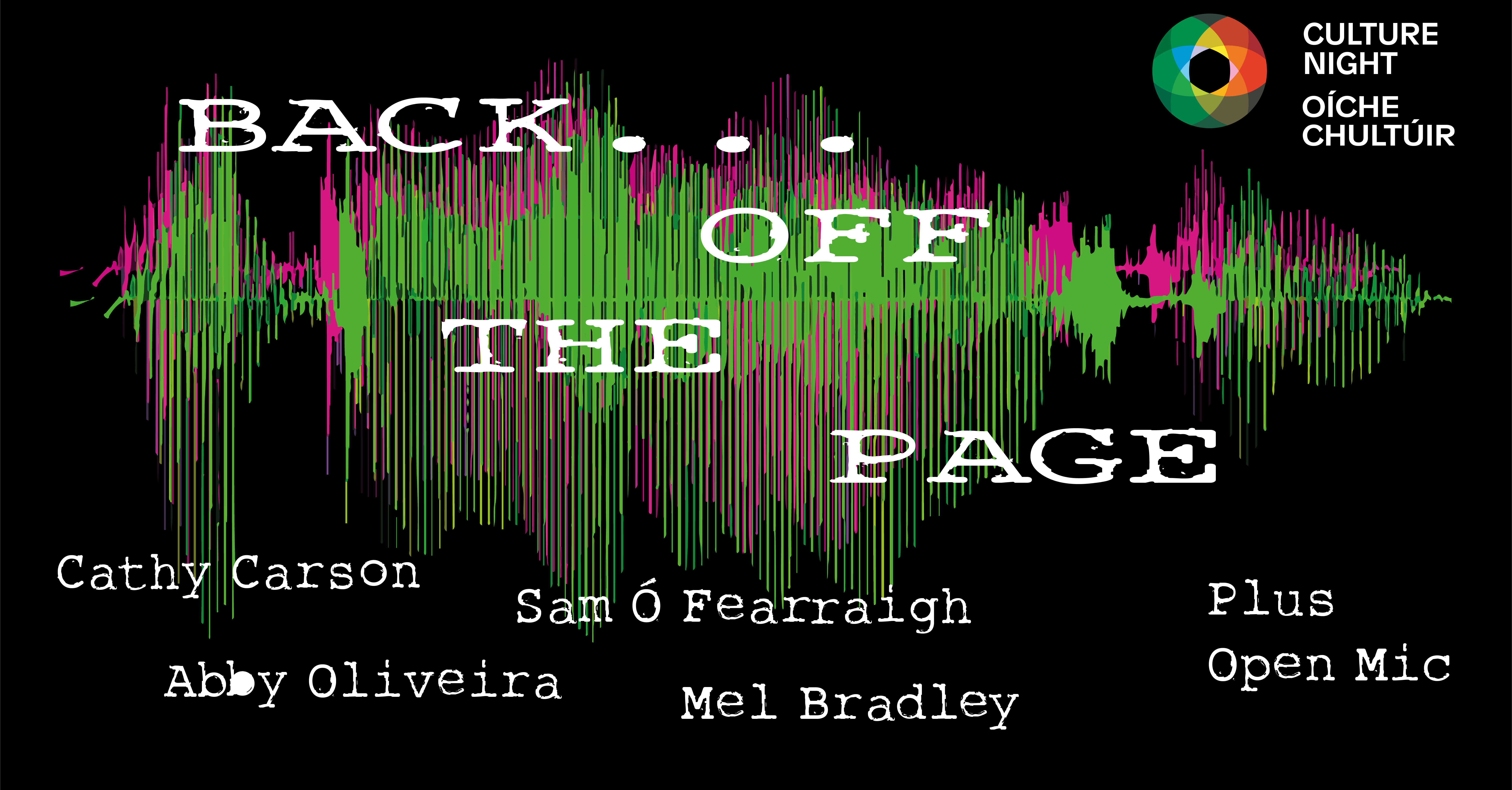 Culture Night 2022 and we have performances from some of the North-West’s finest spoken word artists with open mic. Spoken word may have taken longer to get literary recognition than its page counterpart, but it’s been around for a lot longer. And we’re going to show you why.

Four spoken word artists, Abby Oliveira, Cathy Carson, Sam Ó Fearraigh and Mel Bradley, will challenge the ideals of literary inclusion by showcasing their individual oratory stylings and diverse voices. We will also welcome anyone who wishes to share their own voice in our open mic.

Abby Oliveira is a writer and performer based in Derry.  Her work is often cross-discipline and collaborative; comprising poetry, storytelling, music, prose, playwriting, and/or physical performance.   She’s all into the battles & triumphs of the human mind, body, and spirit in relation to the socio-political/cultural tornado that has been the 21st century.  Her work has been most recently published in The 32: An anthology of Irish Working Class voices (Unbound, 2021), The New Frontier: reflections from the Irish border (New Island Books, 2021), and Empty House: poetry & prose on the climate crisis (Doire Press, 2021).  She has been commissioned as a writer by organisations such as The MAC in Belfast, BBC Radio 4, BBC Radio Foyle, RTÉ Radio, and more.

Mel Bradley is a spoken word artist, writer, playwright/ theatre-maker, multimedia artist and actor. A gatherer of the untold stories of women. An outspoken queer feminist performer with a candid voice and an unhealthy obsession in the Virgin Mary. A self-described creative genius with the attention span of a gnat who began her spoken word career as a slam poet and now boast three spoken words shows, and a play, ‘You Maiden, I Mother’, ‘Ms Noir’s Seven Deadly Sins’, Proud To Be: Beyond The Labels of Me, and her latest spoken word show ‘For The Love of Mary’, which maps a personal journey to finding the Virgin Mary through the stories of women living in Ireland, is being shown in Echo Echo Dance Theatre Company on October 6th.

Cathy Caron is a writer and spoken word performer whose work focuses on human condition and connection. Unafraid, unflinching, heartbreaking and heartwarming she has performed for festivals, theatre, radio, television and podcasts. She was shortlisted as Best Spoken word performer in the Saboteur awards 2022 and her one woman show “Becoming Marvellous” won the saboteur Best Spoken Word Show award in 2022.

Sam Ó Fearraigh is from Gort a’ Choirce, Co. Donegal. Although he came late to the language he now works mainly in Irish, writing poetry, fiction, and for stage and screen. His poems have been published in The Poet’s Republic, ROPES, and the anthology Green Carnations. He won the 2021 Liú Lúnasa Slam Poetry competition and two of his poems placed first and third respectively in the 2021 Francis Browne Poetry competition. In 2020, he was commissioned to write and produce a short verse-play, Balbháin. In 2022, he collaborated with harpist and composer Úna Monaghan to create and perform five new poems as part of the 1500 Colmcille celebrations. His short stories have been published in the anthology Bláth na dTulach and in Splonk magazine. He currently writes for Ros na Rún.